Please note that chapter advisors are responsible for the selection of both undergraduate and graduate candidates. The chapter then votes for approval of the candidates to membership and sends letters/emails of invitation. Students are not allowed under any circumstance to select initiates on their own.

The most significant responsibility of a chapter is to maintain its continuity. Both the chapter president and chapter advisor have significant responsibilities in achieving this. Although the operation and running of a chapter is achieved primarily by the chapter president and officers, the chapter advisor is ultimately responsible to see that proper election of new members is conducted twice during the academic year.

The process of selecting new members and holding initiation should follow these steps:

i. Within a couple of weeks after semester starts, chapter president informs advisor to attain the list of eligible undergraduate and graduate students (see eligibility requirements below). Advisor obtains the list from administrative secretary and provides it to the president.

ii. President calls a chapter meeting to vote on the suitability of each eligible students to be invited to become PTS members and finalizes the final list of candidates.

iii. The chapter corresponding secretary sends out emails to candidates for an informational meeting for the prospective initiates where the scope and mission of Pi Tau Sigma is presented to the students. If keys and plaques are utilized, they are distributed and the initiation fee is collected from students that are interested in joining. A suitable date of initiation is set.  Candidates are instructed to polish their keys, varnish their plaque and attach the key on it. Chapters may employ set requirements that candidates need to fulfill to earn the right to be initiated.

vi. In completing the registration form, it is paramount to download the form from the website and complete it following all the instructions on the form. It is essential, to have the initiates enter their non-university emails on the form. The completed form needs to be emailed to the national secretary, no later than 10 days from the date of the initiation. A paper copy of the registration form along with a check for the total amount is mailed to the national Secretary-Treasurer within 30 days from the day of the ceremony.

viii. A chapter is allowed one initiation per semester or quarter if the university's academic year consists of three quarters. If for some reason a second initiation must be held, a fee of $15 must be submitted, in addition to registration fees, to cover the extra shipping and handling costs.

ix. If the date of the initiation is set, and you are certain that all initiates are committed to become members, you may complete the registration form and email it to the national secretary for processing, ahead of the initiation. If this happens at least two weeks before the initiation date, you will be able to receive the certificates and membership cards in time to distribute at the end of the ceremony. In these instances, the chapter should avoid adding or subtracting initiates from the original list submitted.

x. When emailing the excel registration form, please document the date that the signature page picture was emailed to the secretary treasurer.

xi. If a chapter holds an initiation and does not register it with the national office, the initiated students are not considered Pi Tau Sigma members, and they should not indicate so in any form, as it might be viewed as plagiarism if a membership inquiry is made to the national office on their membership status, as there would be no such record. Note that government agencies tend to submit such inquiries.

xii. There is a $50 inactivity fee assessed to chapters that did not register an initiation for the previous two or more academic years. This fee is entered on the excel registration form.

1. Members in this organization shall consist of three classes, namely: Undergraduate, Graduate and Honorary. Members are permanently classified upon their initiation.

3. Any transferred student, in addition to the rest of the eligibility requirement, needs to:

4. Undergraduate members shall be chosen from students on a basis of sound engineering ability, scholarship service, leadership, and integrity. Members shall be selected from eligible candidates currently in the last two years of their mechanical engineering program.

5. To be considered for election to undergraduate membership, a student's scholastic ranking must lie in the upper twenty-fifth (25) percentile of the student's respective classification with a grade point average greater than or equal to 3.25/4.0.

6. A last term senior who is in the upper twenty-fifth (25) percentile of the seniors’ class, with a grade point average greater than or equal to 3.25/4.0, and who is deemed worthy, may be initiated only upon permission of the Board of Directors. Requests for this permission, stating the circumstances for justifying membership, shall be signed by the chapter president and chapter advisor, and shall be sent to the Board of Directors Secretary-Treasurer for approval. Here is some help before you consider submitting a request for exception. If the student was invited to join in previous semesters and chose not to do so, this would exclude him/her for consideration. If the student was not eligible to join as a junior but became eligible in his/her first semester senior and either the chapter failed to hold an initiation that semester, or the student was studying abroad then a petition should be submitted.

7. Graduate members shall be chosen on a basis of sound engineering ability, scholarship service, leadership, and integrity. Graduate members shall be selected from students having already completed an accredited undergraduate degree program in mechanical engineering and are currently enrolled in a master’s or doctoral degree in mechanical engineering. Master’s degree candidates shall have completed one academic term of residency, while doctoral degree candidates shall have completed one academic year of residency, rank in the top 35% standing of all graduate student candidates in the mechanical engineering program, and have a minimum GPA of 3.5/4.0. Eligible graduate members on the term that will be graduating, may be initiated only upon permission of the Board of Directors. Requests for this permission, stating the circumstances justifying membership, shall be signed by the chapter president and chapter advisor, and shall be sent to the Board of Directors Secretary-Treasurer for approval. Inducted graduate students shall be members of the chapter that they were initiated in. The maximum number of graduate students in a chapter may not exceed 25% of the total undergraduate members of the chapter.

8. Active graduate members are allowed to vote or hold office unless local chapter bylaws do not permit it.

9. Honorary members shall be selected on the basis of successful achievements in the profession of mechanical engineering. Practicing engineers and full, associate, or assistant professors of mechanical engineering are eligible. Honorary members need to have a degree in Mechanical Engineering to qualify. Each chapter may up to four honorary members per year. Two of these shall be exempt from payment of the registration fee. A statement of justification for the honorary candidates need to be communicated by the chapter advisor via an email to the Secretary-Treasurer for approval by the BoD, prior to the induction ceremony.

10. Honorary members shall not be allowed to vote or hold office.

11. An undergraduate or graduate member who fails to graduate from the mechanical engineering program will forfeit their membership status.

Please note that chapter advisors are responsible for the selection of both undergraduate and graduate candidates. The chapter then votes for approval of the candidates to membership and sends letters of invitation.

The roll-book needs to be a hard cover book that is bound, and the required information needs to be entered in writing directly on to the pages. You will need to record your chapter name and date of the initiation at the top, following it by the names, signatures and chapter positions of the officers conducting the ceremony and advisor (if present). Below that, the printed names of the initiates along with their signatures need to be entered. 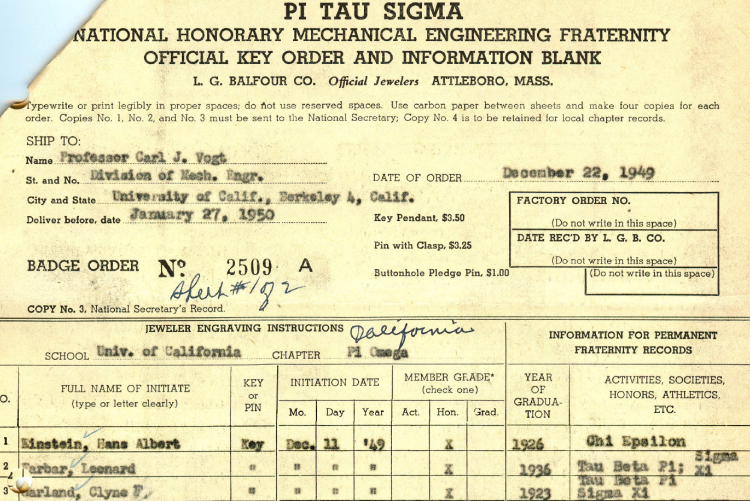