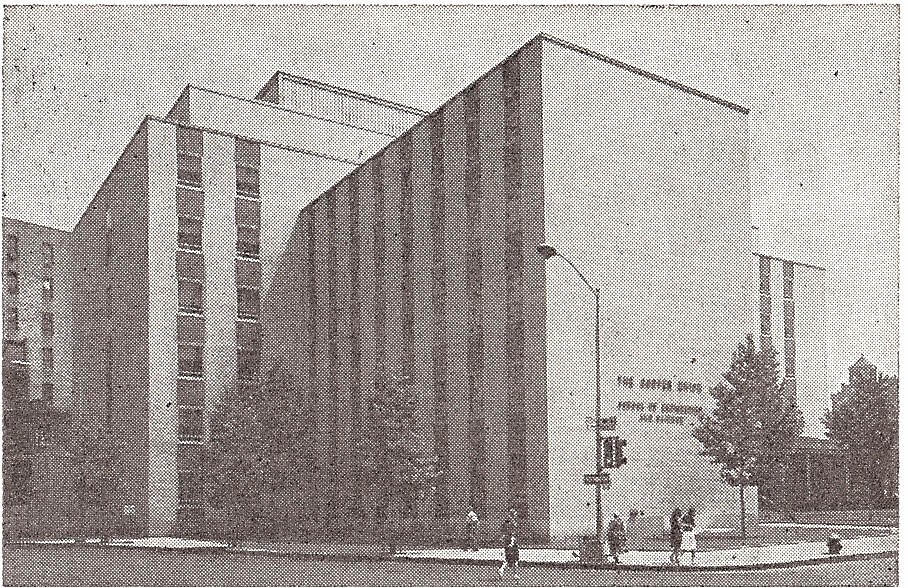 Upon the recommendations of Professors Vopat and Roemmele, and the enthusiastic response of students to the ideals and aims of Pi Tau Sigma, a petition was placed before the National Council for permission to create a chapter at The Cooper Union. The petition was granted and on May 21, 1949, the Pi Phi Chapter was formally installed at ceremonies presided over by National Vice-President, C. H. Kent.

Traditionally, the Pi Phi Chapter directs its energies toward providing a direct line of communication between the students and faculty. To this end, the Pi Phi Chapter provides assistance to the Mechanical Engineering Department, disseminates freshmen orientation information, conducts an elective rating program and participates on the Joint Honor Societies Committee. As a service to graduating seniors, the Chapter conducts a graduate school survey. In the area of scholarship, the Chapter provides for student tutoring and presents an award to the junior who exhibits exceptional ability in his sophomore year.

Cooper Union Pi Phi led two induction ceremonies this year, in the fall and spring, per the traditions of Pi Tau Sigma- welcoming 5 new junior members into the society as well as one honorary member. While this was one of the smaller classes for Cooper Union Pi Phi, the 2018-2019 year beat internal chapter records by a large margin, indicating the high commitment that every member of the chapter has to social outreach and engaging underprivileged students in engineering careers.

During the 2018-2019 academic year, Cooper Union Pi Phi is proud to have hosted 482 students for its flagship STEM days program, where students from middle schools and high schools in the NYC metropolitan area are invited to experience a day of engineering modules, with each module customized to the age and school curriculum of the students. Moreover, students were allowed to experience a wide variety of engineering modules, varying from demonstrations of an acetone engine (organized in cooperation with the Formula SAE team) to building spaghetti bridges to meet weight-bearing requirements (civil engineering) to demonstrating the concepts of material elasticity using an Instron machine (mechanical engineering), allowing young (and hopefully budding engineers) students to truly experience the possibilities in engineering. Members met a minimum commitment of volunteer hours required per semester, with some going above and beyond and committing over 25 hours a semester to engaging students.

Cooper Union Pi Phi also hosted some smaller scale events that catered exclusively to members of its mechanical engineering student body, such as FE (fundamentals of engineering) exam practice questions delivered to their email inboxes once a week, as well as opportunities to voice their opinions on curriculum reform within the mechanical engineering department to include new minors and concentrations, particularly aerospace engineering. This is a cumbersome process due to ABET requirements, but we are proud that our vice-president is bringing these opinions to the faculty body and actively discussing the possibilities of integrating new courses into the curriculum to better serve the student body.

Cooper Union Pi Phi was fortunate to send its President and three other members, including an even mix of juniors and seniors, to the national convention in snowy Colorado at Colorado State University. Junior members better understood the organization of Pi Tau Sigma, and senior members learned how to better transition leadership smoothly between years, allowing for more efficient operation of the chapter. Chapter members also networked with members from other chapters and enjoyed lab tours of the facilities at Colorado state.

This year, the Cooper Union Pi Phi chapter hosted many events and programs that exemplify its commitment to both the Cooper Union and local community. Particularly, through the continued effort by the chapter members, the STEM Days and STEM Saturdays Outreach programs not only flourished, but grew by 25%! The chapter also helped the mechanical engineering department faculty evaluate the feasibility of a minor and sent out weekly questions about the FE exam to educate students.

The flagship program of the Pi Phi chapter, STEM Days had over 350 students attend this year. The middle and high school students who attended were from NYC schools that had a high population of underrepresented minorities and genders in engineering. The list below shows the schools that attended.

Long Island School for the Gifted

Every Pi Phi member contributed at least 3 hours and new initiates into the chapter led at least one STEM Day. Though the requirement was three hours, a few students went above and beyond, volunteering 25+ hours! Some of the projects that the students were involved in were:

PTS member also volunteered in STEM Saturdays, a program where current students teach high schoolers about microcontrollers, CAD, and other computer programs that will give them an edge in college. Our chapter’s role was to also critique the projects that the students produced and share insight into changes that could be made. The program was a complete success and many students hope to come back and even enroll at Cooper full time!

While these volunteer programs were especially targeted towards the community, the chapter also held the FE Review “Question of the Week” Program. Current Cooper students enrolled in the program would be emailed FE exam question weekly, each response was tabulated, and, at the end of the semester, the student with the most correct answers was given a prize. Lastly, the Pi Phi board members sat in on faculty meetings to provide insight into minors and other departmental initiatives underway.